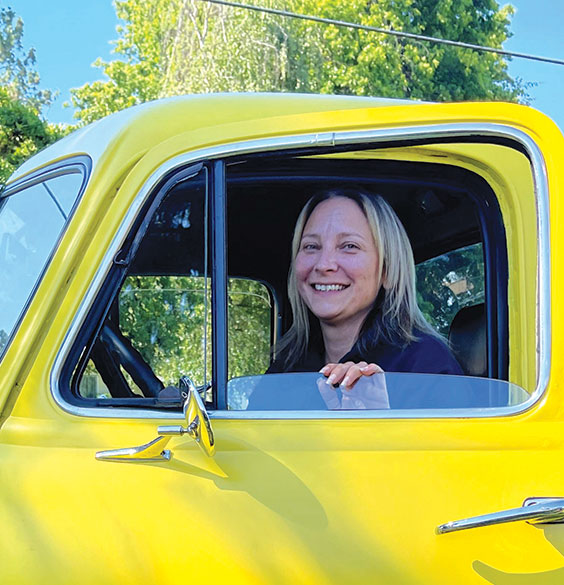 Why she is an Amazing Neighbor:
She lives a life of service and involvement to make Molalla a better place to live

To say there’s a strong family connection to being involved and helping neighbors in need for a particular Molalla woman is to know who and what she is as a person.

Carissa Ross was raised with community involvement and caring about the people around her. She’s carried that with her into her life in Molalla, so much so that she was nominated for this year’s Pamplin Media Amazing Neighbors honor for Molalla.

Getting involved is something that comes naturally for Ross.

“As far as being a good neighbor, I just try to do what I hope others would do in my time of need,” Ross explained. “I grew up in Portland, and our street was more like family. On our block, everybody watched out for everybody.

It took a village, and I think that’s how it should be.”
She said being helpful in the community was passed down within her family. Her grandparents were key people in Corbett and were heavily involved in that local area.

“My grandma was on every board you could possibly imagine,” Ross said. “Both of them were very into community service. My mom is very much the same way but within her church. That’s just what I grew up around. People shouldn’t go without if you have the means to help. That’s how my grandparents and my mom lived.

Ross helps run Molalla Cares, a local nonprofit, which gets involved in a host of needs within the city. They function as a broad community service organization that works to meet the needs it sees within Molalla.

“We kind of prioritize veterans, the elderly and disabled,” Ross said, “but we help everybody we can. I’ve got the most amazing volunteers and a great board. These volunteers have become my closest friends, and when I put out a request for help, they respond.”

Ross calls this close-knit band of like-minded community helpers a “huge blessing” and noted that it has been a lot of work, “but a lot of fun.”

“We helped with the (wild) fires, gathering supplies and taking things to people in need during that,” she explained. “We helped the elderly leave if they needed to. Then we were blessed with that lovely ice storm. We are still getting calls for help cleaning up after that. I can’t tell you how many properties we’ve helped clean up. It has been a wild ride.”

From cleaning up property, to fixing a porch, to making sure a roof won’t leak, Ross has been part of a group that’s made life a little easier for some who need it. Helping others in need is most definitely who she is.

She and her significant other, Jeremy, have lived in Molalla for more than three years, and she said that getting involved in Molalla has been a joy.

“It is almost easier to get involved here, I feel, than anywhere else I’ve been,” she said. “What has really helped has been social media. Everything is publicized, and I don’t have to look very far to find someone with a need. I just hear it or see it — sometimes it’s the luck of the draw. I’m where I’m supposed to be. I do believe in the man upstairs, and I try to do the best I can with what I got.”

When she’s not volunteering on a project or meeting a fellow Molalla resident’s needs, she enjoys spending time with her grandchildren, camping or bike riding, fishing, barbecues, and general get-togethers.

“I got a ’51 Chevy five-window, it’s a two-seater, and I love to take my grandkids — one at a time, of course — on rides. It’s the most fun, simple thing ever. It was my dream truck as a kid, and I have to say there’s something to be said for cruising in an old classic.”