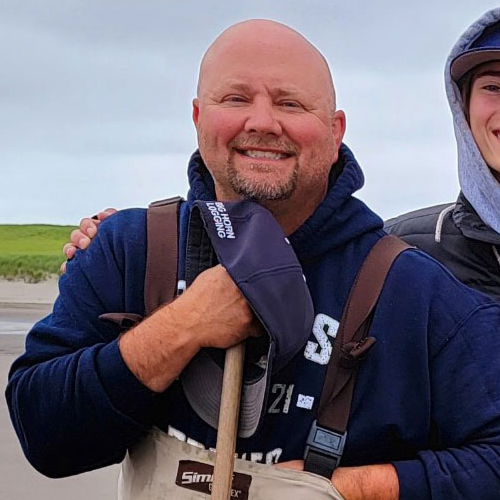 Why he is an Amazing Neighbor:
Chris gives back to his community through coaching, contributing work to local athletic facilities, and helping at community events.

BACK IN BANKS AND PROUD OF IT

Chris Lyda was born and raised in Banks, wrestled and played football for the high school, and spent the bulk of his young life in the small western Washington County town. But it wasn’t until he left and came back that he truly appreciated what Banks had to offer.

Now it’s his turn to give back.

“Attend any event in the Banks community and you will probably see Chris helping out, volunteering, or cheering on those participating,” Banks High School principal Jacob Pence said. “He genuinely wants to see the best opportunities for kids in our community through academics, extracurriculars, and experiences as a Banks Brave. We need more people like Chris Lyda.”

Lyda is quick to downplay his contribution. Despite, by his own account, coaching or attending games roughly 50 weeks each year and contributing both time and money to the betterment of Banks, its school district and its facilities, it’s his wife, Angi, that he says is the town’s true “Amazing Neighbor.”

“When I first heard about this,” Lyda said, “my first thought was that if anybody in my house deserves an award, it’s my wife. Not me.”

Maybe. But Pence said Chris Lyda is not only a valuable contributor to both the school and community, but also a willing one.

“Chris is a very engaged volunteer in the community,” Pence said. “He is very busy running a business but still finds time to help out the community in many ways. He’s the type of guy that we can call and he will be there for anything we need.”

As a young adult, Lyda followed the fish, working as a guide in Alaska, Colorado, and even South America before returning to Banks in 2001. He began working with his dad and helping out on the family farm.

Soon thereafter, Lyda married Angi and started a family. He says he quickly understood that Banks wasn’t where he had to be, but rather where he wanted to live and raise his kids.

“As a young kid, you just want to get out,” he said. “But I really came to appreciate home when I came back. I wanted to be here, rather than being stuck here.”

As his three boys, Jack, Nate and William, got old enough to play sports, Chris Lyda gravitated to coaching. In his words: “Someone had to do it, so why not me?”
Since then, he’s worked with Banks youth baseball and football. He can be heard on the microphone on fall Friday nights doing the public announcing for Braves football games.

Also, as an electrician by trade, Lyda has been known to do handiwork around the school and its facilities, including fixing lights and the irrigation at Kelly Field.

“It’s kind of cool to be at a game or something and hear someone say, ‘Hey, they fixed the lights,’ or, ‘The field looks great,’” Lyda said. “That feels good to know that you helped.”
The 49-year-old can also often be found helping out at town barbecues and city events. He has even been Santa Claus at the Santa’s Breakfast Elementary PTO fundraiser.

You’d think with running his own business, meeting his family obligations, and continuing to do his work around town, Lyda would be looking to step back from coaching and extracurriculars, but Lyda says he can’t even think of letting the kids in the Banks School District down. While it’s difficult to keep up with everything, he said the return on the investment is immeasurable.

“Sure, it’s tough getting life balance, but I’ve made a commitment to these kids because I want them there, so I have to be there,” Lyda said. “It’s been hard, but it’s also extremely rewarding.”

And part of that reward is the manner in which the community has treated him. As a small business owner, he’s dependent upon a steady customer base to keep him busy. Lyda says Banks residents have thoroughly embraced him and his business, and in return, he’s determined to be there for them as well.

“The community’s blessed me,” he said. “I don’t have to drive to Portland, the coast or even McMinnville. I do work for the farmers, loggers, local folks that work here. My work is community-based. Because of that, I want to give everything I can back to our community.”
While Lyda is honored to be a Pamplin Media Group Amazing Neighbor this year, he still wanted to put in a plug for Angi, his wife.

“She’s absolutely the most beautiful person inside and out,” he said. “She does such amazing stuff, and I don’t think a day goes by that she isn’t doing something for somebody. I’m super-lucky to have her.”