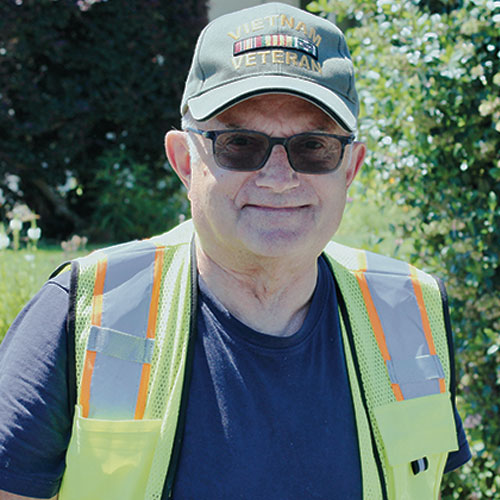 Why he is an Amazing Neighbor:
Picks up gallons of litter during weekly outings in his small town..

It was during daily walks in his community that a longtime Fairview resident started to become troubled by the buildup of litter and trash lining the streets of his hometown.

Gerald McGarvin, a U.S. Marine veteran who has lived in East Multnomah County since 1977, was making the most of his retirement, striding nearly 80 miles a week along local neighborhood streets around the Marjorie Meadows Neighborhood.

During those outings, he became tired of seeing all the trash that was ignored by others — needles, dog waste in bags, straws, wrappers, bottle caps, plastic drink containers, rusted shopping carts, worn clothes, and so many other things that were creating a blight on his community.

“One day I just grabbed a Target bag and picked up as I went along,” McGarvin said.
He started on city streets near the Marjorie Meadows Neighborhood in east Fairview, picking up trash along Northeast Halsey, Northeast 223rd, and Northeast 207th Parkway, dumping it in trash bins at city parks and TriMet stops.

Eventually, his enthusiasm outpaced those humble beginnings. He contacted Mayor Brian Cooper to set up a partnership with the public works teams to haul off his collected trash in a more timely fashion. Then he crafted a rolling cart with storage, tools, and a large bin to operate more efficiently.

Every Monday, rain snow or shine, McGarvin goes out on a six-mile pick-up loop to make a difference. It is work that otherwise would get left undone — the city doesn’t have the workforce to properly go out and regularly remove the litter, while many others would see the problem but not feel compelled to do something about it.

“Fairview is my city,” he explained. “I drive around and see what a mess Portland is, or how in Gresham there is trash all along the roadway.”

“I can’t let Fairview look like that,” he added.

He grew up in Hood River, meeting his future wife Jane at the local high school, before moving to the Portland-metro area. One year after his wedding, he was drafted into military service. McGarvin served in the U.S. Air Force for four years, from 1966-69, stationed in California and Taiwan, before finishing his duty by flying in Vietnam for a year.

Upon returning home, he worked a long career with Cotter & Company, starting in the warehouse, before retiring in 2013. But McGarvin was never one content to sit around idle, so he began to volunteer.

First, he started to spend three days a week volunteering at the Genealogical Forum of Oregon, which is the most extensive genealogy library in the Pacific Northwest.

“I research for people to help them find out stuff about where they are from and their ancestors,” McGarvin said. “I like all the little mysteries to uncover.”

He mows neighbors’ lawns, weeds public sidewalks, and helps with any odd tasks that need an extra pair of hands. He also is active in advocating for others, attending city meetings and speaking out on issues plaguing his neighbors.

And he began his trash pick-ups.

“I think a lot of the trash is people driving through — you don’t see it as much on the side streets,” McGarvin said. “Take pride in your city.”

The amount he cleans varies. One week earlier this summer, he hauled six 30-gallon bags of trash, but it is getting better. McGarvin now works with the city public works team to better dispose of the trash he bags, sending them a message where it was left so he doesn’t monopolize public receptacles. His visible presence has been inspiring others.

McGarvin is impossible to miss on his outings, despite his self-proclaimed desire to be a loner. He dons a bright yellow safety vest, pushes that homemade cart, and swings his trash picker with easy confidence.

“The less trash there is on the street, the less gets dumped,” he said. “The businesses are keeping their own properties cleaner since I started. People see me do it, and then take care of it, so I don’t have to.”

There have been some mimics, which McGarvin loves. A guy has started picking up trash along Glisan, and another woman has adopted Fairview’s Northwest Neighborhood.
“I do my own thing, but if it inspires others, that is great,” McGarvin said. “I like that this is a small community, and each of us can make a difference.”