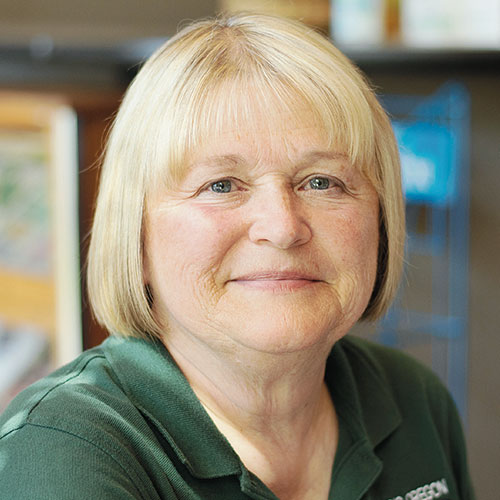 Why she is an Amazing Neighbor:
She keeps St. Helens CERT running, for emergencies and community events

READY FOR DISASTER, ORGANIZING FOR FUN

When visitors enter the parking lot to watch fireworks at St. Helens on the Fourth of July, scrape their knee running around the Columbia County Fair & Rodeo, or grumble as they’re forced to drive a detour route during the St. Helens Kiwanis Parade, St. Helens CERT is there.

Holly Haebe has been coordinating St. Helens CERT — the Community Emergency Response Team — for more than a decade.

Haebe is at the events CERT assists, but she also spends the weeks before getting CERT volunteers scheduled and coordinating with event organizers.

Haebe signed up and was among the first to complete the required training. Federal grant funding paid for a program coordinator for the first few years, but then St. Helens CERT was left to rely on volunteers.

Haebe and other volunteers formed a steering committee, which eventually led to Haebe becoming the team coordinator.
“Holly raised her hand and jumped right in,” Moss remembered.

Haebe spends hours — sometimes close to a full-time job during the summer when there are events nearly every weekend — creating volunteer schedules. She tries to keep shifts short while contending with volunteers’ busy schedules, keeping track of equipment like traffic signs, and even doing the on-the-ground volunteer work herself with fellow team members.

“I like to have things very organized because I realize that with people volunteering, they don’t want to volunteer and waste their time,” Haebe said.

She remarked, “I can write as many emails as I want, but if they don’t volunteer, we don’t get it done.”

Each year, roughly 20 to 25 people undergo the initial training, which takes place over eight weeks in the spring.

But in St. Helens, CERT volunteers aren’t waiting for a catastrophic earthquake.
Volunteers “can wait around for a natural disaster, or we can keep them engaged. That’s where Holly really excelled. … She was looking for opportunities to insert volunteers in our activities,” explained Moss, who retired as St. Helens’ police chief in 2018. “It took a lot of weight off our shoulders in the police department.”

CERT has also assisted when hospitals and other emergency responders need to conduct preparedness drills. St. Helens CERT primarily works in the city, but it also helps in Rainier and other Columbia County communities that don’t have active CERT programs.
CERT volunteers have helped in true blue emergencies, too.

In 2020, when thousands in Washington, Yamhill and Clackamas counties fled wildfires — many of them with livestock — CERT helped to direct traffic at the county fairgrounds, which was used as an evacuation center. Volunteers also help to staff cooling centers during dangerous heat waves. They fill and distribute sandbags when buildings are threatened by flooding. On at least two occasions, they’ve even helped search for missing children (both were found safe, Haebe said.)

But more of the work has been activities like traffic control at events, where if it goes smoothly, attendees “don’t notice — they don’t even know we’re there,” Haebe said.
The best part of CERT is “just the neat people,” Haebe said. “And it’s nice to know that when you get done, you’ve done something to help.”

Haebe started volunteering with CERT after her kids had grown up, and she had retired from a 27-year career as a dental assistant.

CERT helped channel Haebe’s love for good organization into a meaningful pursuit.
“What makes it (to me) a fun event is when it’s well-organized,” Haebe said with a laugh. “And that shouldn’t be that way, but it makes it a lot less stressful for me.”

As she approaches two decades with CERT, and as her grandchildren grow up and have games and recitals for grandparents to attend, Haebe would like to train a successor. Eva Frost, Haebe’s best help, is 10 years older than her.

“I’m hoping to find somebody young that will help me do it so that I can back out a little bit more and do more with my grandkids,” Haebe said.

“You need a person like Holly to make these programs successful,” Moss said. “For some of these programs that sputtered along the way, they were lacking, in my opinion, a Holly Haebe.”