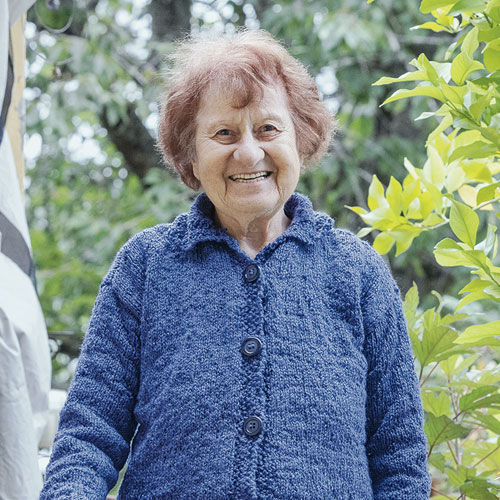 Why she is an Amazing Neighbor:
For more than 20 years, Alice has organized a display in West Linn for her neighbors to enjoy.

Alice Richmond is 4 feet and nine inches of determination, patriotism and love for West Linn. The 92-year-old Richmond is originally from France, but has lived in West Linn more than half a decade.

While she can often be found vocally participating at local government meetings, Richmond is perhaps best known around West Linn for organizing the annual Fourth of July celebration and fireworks show at Willamette Park. The event has become a pillar of summer for many West Linn residents.

Richmond first put on the celebration more than 20 years ago.

“I personally am very fond of the fireworks we do in France July 14 for Bastille Day, and I heard nothing around here about celebrating the Fourth of July,” Richmond said. “At first I bought fireworks from the stand.”

Richmond set off the fireworks for her neighbors. According to Richmond, the neighbors enjoyed it but wanted a bigger show.

“They kept telling me ‘Higher Alice! Higher!’” she said.
Knowing there were restrictions in Oregon on the size of personal fireworks, Richmond began to think of how to put on a bigger show for her neighbors without violating the law.

Richmond eventually thought of asking the National Guard office in Oregon City if they were interested in helping with the fireworks and participating in a color guard ceremony.

“For higher fireworks, I learned you have to be in the military or have a license, and the license was very expensive,” Richmond said.

Richmond reached out to her friend Mark Parrish, a National Guard colonel from West Linn. Parrish then recruited the help of fellow National Guardsmen who volunteer at the show each year.

The event was so enjoyable that the military members who volunteered preparing and setting off the fireworks were excited to return each year. According to Richmond, that excitement is palpable to everyone at the show.

“We’re all one. It’s the Fourth of July. We all live in the United States. That (patriotism) pours out for the people,” Richmond said.

A lot of work goes into organizing the show each year. Richmond and her team work with an insurance carrier, a pyrotechnics provider, Tualatin Valley Fire & Rescue, the State Fire Marshall and local music groups for months before the celebration takes place.

And because a fireworks show of West Linn’s magnitude costs tens of thousands of dollars to put on, Richmond spends months leading up to the show contacting local businesses for support. Many people assume the fireworks are put on by the City of West Linn, but the event is independent of the City and receives to financial support.

“She’s a force to be reckoned with,” said West Linn Tidings publisher and fireworks show sponsor J. Brian Monihan. “It hard to say no to Alice. I’m sure many local business owners see Alice coming into their business and reach for their check book.

It’s amazing to think that Alice can generate the funds she does to put on a significant fireworks show here in West Linn each year. I hope I have her energy, zest and determination when I am her age.”

At 92 years old, Richmond said she is slowing down but will do whatever she can to continue holding the West Linn Fourth of July celebration.
“People love the show,” she said.

Between her efforts to put on the celebration each year and her passion for city affairs, Richmond is a real asset to West Linn, City Council President Rory Bialostosky recently said.

“Alice’s fireworks show is special because it brings our community together,” Bialostosky said. “She takes the time to show up to city council meetings and I really appreciate her dedication and civic involvement over the years. She is a role model for continued civic engagement over a lifetime.