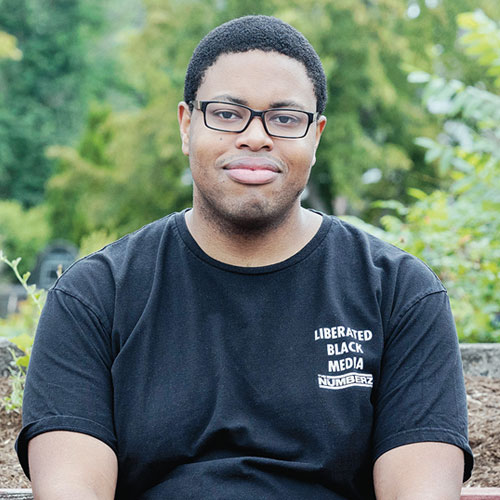 Why he is an Amazing Neighbor:
Bruce Poinsette has amplified the voices of minority community members through student columns and oral histories.

Lake Oswego can feel like a homogenized bubble, according to Respond to Racism member Terri Kraemer.

If not bursting that bubble, fellow volunteer Bruce Poinsette hopes to expand its boundaries by shining a light on the experiences of community members who are often cast aside.

And it’s for his work with the group — including creating oral histories about minority community members, leading what’s known as a “youth empowerment group”  that scribes columns about their experiences, facilitating panel discussions, and helping lead the organization’s initiatives to make Lake Oswego a more inclusive place — that Poinsette was named an Amazing Neighbor.

“With students, he was the impetus behind forming the youth empowerment group and getting students going and helping them with writing,” Kraemer said. “It’s been powerful for students doing the writing because their voices are being heard by the whole community … The most powerful thing he’s done is amplify their voices.”

Poinsette grew up in Lake Oswego and doesn’t mince words about his experience. He recalls regularly experiencing racism, starting with being called “chocolate chip cookie” while being showered with sand in the sandbox as a young child and later noticing classmates looking at him and laughing when the word monkey came up in class.

“The ‘Lake No Negro’ reputation is very much earned, I would say,” he said.
When his mother, Willie Poinsette, started Respond to Racism — a local organization that works to promote anti-racism and inclusivity in Lake Oswego and beyond — in 2017,

Bruce initially balked at joining, feeling like he didn’t want to perform his trauma for people and wondering if the city was a lost cause. Nonetheless, he decided to join anyway, partly because he felt he had something to offer youth who faced the same racism he did.

Poinsette attended the University of Oregon, where he studied journalism, and then further honed his writing and reporting chops working for The Skanner, an African American newspaper based in Portland. And he has used these skills to help students within the youth empowerment group. These columns have run in the Lake Oswego Review newspaper for several years.

They have delved into topics such as deficiencies in the Lake Oswego school system in terms of serving minorities, the Stop Asian Hate movement, and the impact on minority communities after the recent U.S. Supreme Court decision to nix the right to an abortion.

“I know writing isn’t necessarily for everyone, but I know how powerful it is for me. (Because of my writing) I was able to get opportunities where I was taken seriously,” Poinsette said. “I want them (students) to not just have their work out there, but to have their work respected and treated like it should be treated.”

Further, Kraemer said that Poinsette provided a guiding light for the group as it was just starting — and she even described him as a visionary.

“He provided the group and especially the leadership team with the insights into the experiences of Black and BIPOC (Black, Indigenous and People of Color) members of the community and also provided a lot of insight into systemic racism,” she said, adding that white members in particular often aren’t aware of or don’t think about the societal structures they benefit from.

Recently, Poinsette posted interviews he conducted with longtime residents of the community about their lives, experiences in town, and the challenges they face.
“I can’t just speak for Black people, Black males in this community, much less people of color. I want to help elevate voices and empower people to express themselves,” Poinsette said. “I’m not just sharing trauma to be consumed and spit out. I want people to feel like it means something.”

Some of Poinsette’s other work with the group involves organizing meetings, booking acts for local events, and coordinating with the city of Lake Oswego and other local groups. He makes it clear that the city is still far from becoming a welcoming place for all and says resistance from some parts of the community has been frustrating. But he acknowledges that progress has been made in recent years — such as more awareness around systemic racism and events celebrating diverse cultures.

“I don’t want to shortchange that, because that’s something. It wasn’t happening before.

It’s the beginning of where the city could go,” he said.