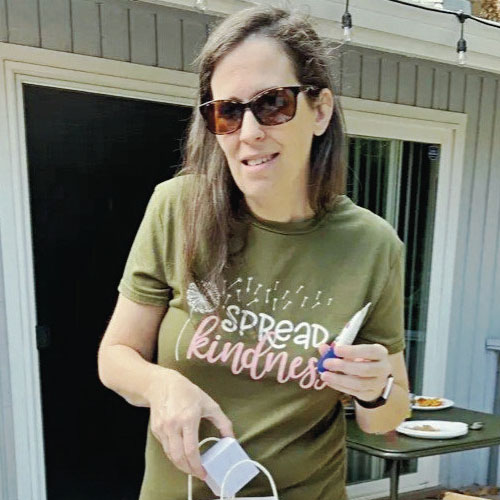 Why she is an Amazing Neighbor:
Fairfield works with Positive Charge! PDX to build community and marshal resources for charitable causes

Karen Fairfield remembers what it was like living paycheck-to-paycheck, barely scraping by.

She carried her calculator into the grocery store to ensure she didn’t “overdo it.”
Fairfield is in a position now where she can leave that calculator at home.

Today, she is determined to help others wherever she can. Positive Charge! PDX gave her that chance.

Fairfield first got involved with the nonprofit In 2017, looking for an opportunity to be in a community with others.

“I had spent a number of years not having enough to get by all the time, and I had lost my husband a couple of years prior to getting involved with Positive Charge!, so it kind of gave me an outlet — something to look forward to,” said Fairfield, who lives in Tigard.

Positive Charge! was “a way that I could meet people and be involved in the community in a way that wasn’t just tied to home or work,” Fairfield said. “It was there as a way to surround yourself with good people — and I think we all needed that.”

Positive Charge! PDX was founded shortly after the 2016 election with a mission to “amplify kindness” and combat “negativity … sadness and fear,” according to the organization’s website. The nonprofit coordinates fundraisers, distribution and events to tackle community needs like homelessness, health care costs and climate disaster relief.

“Anytime that we can bring a little bit of positivity into this community, I think it’s a good thing,” Fairfield remarked. “I think we need it. I think that all of the world needs it.”

One of the things that attracted Fairfield to Positive Charge! was its inclusivity. The organization welcomes and accepts people from all backgrounds and walks of life, as long as they support and are willing to contribute to its mission.
She also meshed well with the people involved.

“I just found them to be so wholesome, inviting,” Fairfield said. “Just the kindest people.”

Fairfield started with Positive Charge! just going to monthly events. But she eventually got more involved with managing social media pages and coordinating events.
Today, she is a board member of the volunteer-run organization
Learning the ins and outs of helping run a nonprofit without any paid staff while allowing some degree of flexibility to honor everyone’s schedules has been a “learning curve,” Fairfield said — but they’re making it work.

Recently, Positive Charge! organized a collection drive for Ukraine, which neighboring Russia invaded in February. Millions of Ukrainian civilians have been displaced, and thousands have been injured or killed by Russian troops, artillery and aircraft.

Fairfield and Positive Charge! wanted to do what they could to help the people of Ukraine. But organizing an international relief effort is tricky work. She said the organizers fell extremely behind, and it felt like “insanity.” But they were able to meet after the fact to learn from their mistakes and figure out a better way to organize future efforts.

“We’ve managed that pretty well as a group,” she said. “If something’s just not quite sitting right with somebody, we revisit and just kind of say, ‘Well, let’s see why,’ and see if we can figure out how to fix that. How do we adjust?”

In the future, Fairfield hopes to see Positive Charge! grow into something more organic, she said, evolving from reactive to proactive, and making a sustained impact in the community.

“When people think, ‘What can I do?’ they know they got to find something they can do,” she said. “They can just look up Positive Charge! and what’s out there.”