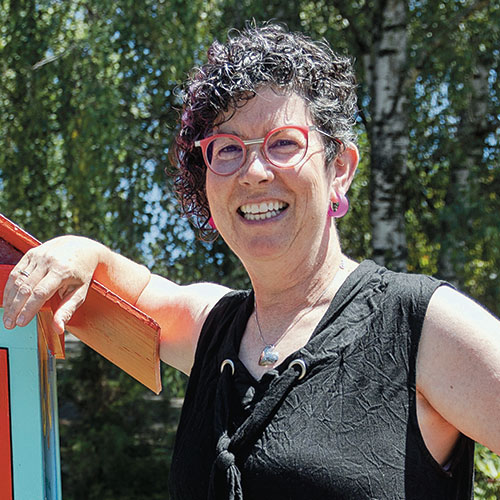 Why she is an Amazing Neighbor:
Unhappy with negativity about her hometown, she got friends together to create acts of kindness. Find out more at positivechargepdx.org.

There’s a lot of negativity floating around Portland, and some residents think someone should do something about that.

So Sallie Cohen did.

Cohen is one of a group of friends who created Positive Charge PDX: Amplifying Kindness.

It’s a collective of volunteers looking for ways — both small and large — to do good in and around Portland, and to counter some of the negativity that has seeped into the collective consciousness, even before the recent spate of a pandemic, riots, homelessness and a record-breaking heat dome.

“In 2016, there was a whole lot of negativity going around,” Cohen says. And like most people, she and her friends would read something on social media, share it, and feel down about it.

“It became really, really overwhelming and pretty depressing,” she says.

The friends got together to spread good feelings and positive impacts. And it quickly grew. The scope and complexity of projects expanded, and they became a 501(c)3 nonprofit in 2019. The group is nonpolitical and not religious. It’s open to anyone who wants to help.

“We’re just bigger than we ever thought we’d be!”

They created a board of directors to decide what causes they’ll take on.

For instance, the group participated in July in the Timbers and Thorns Stand Together project, working in combination with Sunflower Farms PDX in Southwest Portland, which grows food for local food banks and good causes such as Outside In and St. Vincent de Paul.

“Art For Causes” includes a project to sew weighted neck wrap, which can be heated up in winter or cooled down in summer, which they then gave out to emergency department and intensive care workers — at each hospital in Portland — at the height of the pandemic.

“Emergency Kindness” events aren’t as thoroughly planned out, Cohen says. “They just sort of fall from the sky.” Spontaneous causes include donations for Ukrainians suffering from the Russian invasion of their country or the 2020 wildfires in Oregon.

“Every time we have an ‘Emergency Kindness’ event, people respond so quickly.” As an example: the group filled 1,000 backpacks and drove them to the border between the United States and Mexico, and delivered them to children “living in squalid shelters in Tijuana,” she says.

When asked how many volunteers the group has, Cohen laughs. “No clue. No clue. We announce on Instagram or our newsletters that we’re doing something, and people just show up!”

Cohen is a Portlander, born and raised. She attended the high school now known as Ida B. Wells-Barnett — formerly Wilson High — and Portland State University. Her parents grew up here, and most of her grandparents as well.

“I love this. I just really, really love this,” she says. “I love working with the ‘Positive Charge angels.’ They’re such good people. We work really well together. We figure out how to make good things happen.