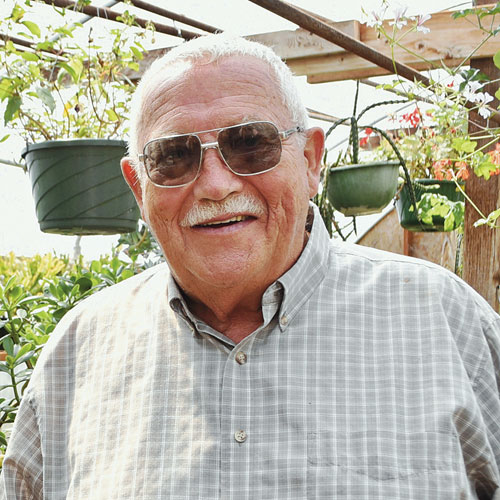 Why he is an Amazing Neighbor:
Terry has served the Sandy, Boring and Gresham communities for more than 50 years as a business owner, member of the Oregon Trail School District Board of Directors, the Kiwanis Club of Sandy, the Gresham Rotary Club and more.

FIVE DECADES OF SERVICE IN SANDY

For the past 53 years, Terry Lenchitsky has been a resident of Boring and a steward of the Sandy, Boring and Gresham communities.

He’s volunteered countless hours as a member of the Oregon Trail School District Board of Directors, the Mt. Hood Community College Foundation, the Kiwanis Club of Sandy, the Sandy Veterans of Foreign Wars, AntFarm board, Sandy Area Chamber of Commerce, Sandy Historical Society and the Gresham Rotary Club, to name a few.

Before serving the Sandy and East County communities, Lenchitsky served his country in the U.S. Air Force and was stationed 35 miles from Russia in the Bering Sea during the Cold War. His job was to identify unidentified aircraft.

Thirty of his 53 years living on his farm on Bluff Road in Boring, he served on the local school board, which he joined when his son was a freshman at Sandy High, and retired from in 2018.

“When you think of all the things you volunteer for, it keeps your mind active and gets you out of bed in the morning,” he has said. “It’s a good feeling.”

In the past, he was also a Boy Scout scoutmaster, and he eventually turned his passion for athletics into an act of service by coaching multiple local teams in baseball and basketball. He still attends many of Sandy High School’s sporting events to support local students.

In his tenure on the school board, Lenchitsky was a significant advocate for career technical education (CTE). He has seen the effects of vocational programs — and the lack thereof — through multiple lenses, as a school district representative and as a business owner and Honke Heating and Cooling in Gresham. He even helped direct legislation to support vocational education in Oregon. Before Lenchitsky sold the business to his son TJ in 2008, he ran an apprenticeship program to teach high school students about the trades.

“We needed carpenters and technicians,” he said. “(I tried) to make sure these kids have the opportunity to be good citizens. There’s always good in a kid. It’s just how you get it out of him or her.”

Though he’s retired from work and the school board, he is still a very active member of the Kiwanis Club in Sandy, and the Sandy VFW. Lenchitsky is one of the longest-serving members of the Kiwanis, and he’s been involved with every Pancake Breakfast and Cruise-In the club has hosted since 1985. His wife Judy is also involved in Lenchitsky’s charitable exploits, serving in the VFW auxiliary for loved ones of veterans and helping her husband with his secretarial duties for the Kiwanis.

“I’ve always had the philosophy that for what you take out of the community, you should put back more,” he said. “It’s been very rewarding to me, spiritually and emotionally, to see Sandy grow over the years. It’s been a long ride. I’ve never let green grass grow under my feet.”